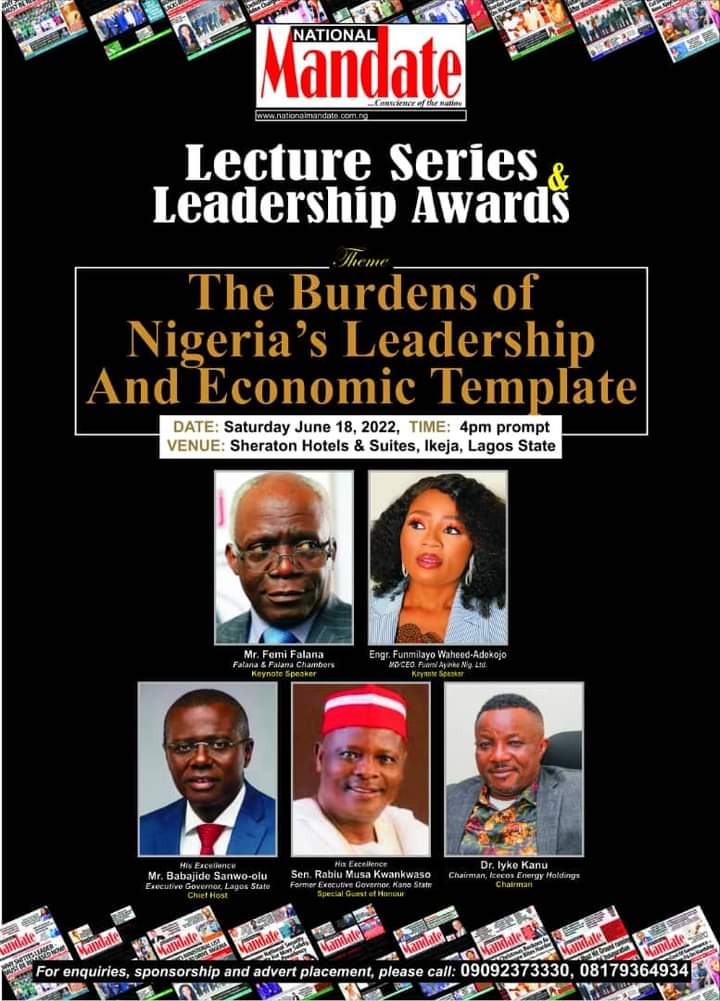 With the theme, the “Burden of Nigeria’s Leadership and Economic Template”, the event promises to be purposeful and in sync with the exigency to right the wrongs of the country.
Several prominent Nigerians are expected to grace the occasion. The program will be chaired by Dr. Iyke Kanu, who is the chairman of Icecos Energy Holdings while the keynote address will be frontally delivered by two eminent Nigerians; the erudite legal practitioner, Mr. Femi Falana and delectable Engr. Funmilayo Waheed-Adekojo, Managing Director/Chief Executive Officer of Funmi Ayinke Nigeria Limited.

His Excellency, Mr. Babajide Sanwo-Olu, the hardworking executive governor of Lagos State is expected to illuminate the occasion with his role as Chief Host of the event, while His Excellency, Sen. Rabiu Musa Kwankwaso, former governor of Kano State and frontline 2023 presidential aspirant is the Special Guest of Honour alongside the speaker of Lagos State House of Assembly, Rt. Hon. Mudashiru Obasa.
The program will commence at 4pm prompt. Undoubtedly, excitement is in the air as observers agree that the event is coming at a critical time when the country is at the point of electing new political leaders.

During the event, several Nigerians who have contributed immensely to the socio-moral and economic landscape of the nation would be honoured with different categories of leadership awards. Some prominent Nigerians to be so honoured are: Prof. Harry Samuel, the co-founder/CEO of Beligetto Holdings Group of National and International companies, Dr. Daniel Kolawole Olukoya, the General Overseer of Mountain of Fire and Miracles Ministries, Dr. Anene Nwachukwu, General Overseer, Rhema Deliverance Ministries.
Others are Mr. Oritsetinmeyin Igbene, CEO, Liberty Assured Plc., Prophet Victor Oziegbe
General Overseer, Word of Prayer Bible Church, Dr. Felix Eiremikhae, MD/CEO, Oracle Experience Limited and one of his most reliable staff, Mr. Paul Osondu, Head, Operations, Oracle Experience Limited and the Chairman of SONA Group of Industries, Mr. A. K. Mirchandani.

According to the host and publisher of National Mandate Newspaper, Mr. Dave Agwazim, National Mandate Lecture Series and Leadership Awards is designed to create a solid platform for engagements on topic salient issues of national importance and reward for leadership excellence.

Dave further opined that every arrangement has been made for a top notch event that will create a national reawakening especially as we gear towards our next general election and that the response and acceptance has been massive. He uses the medium of the press briefing to appreciate sponsors and supporters alike.